Please find out what spotify says that I liked this year 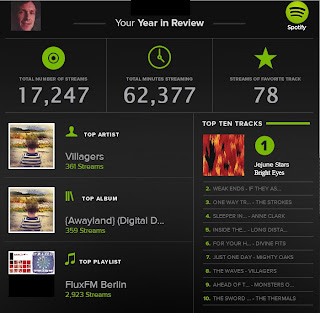 So Spotify has tracked down what the world and I was listening to this year. And I've to say that I'm surprised that "Inside the Flood" is on place 5... Villagers and Bright Eyes - yep - these were important bands but where's Jacob Bellens and Wampire and Turbostaat ....? I'll make my top ten in the next weeks

17.247 streams would mean that spotify had payed something between 120 and 137 € to the artists (see also t3ns ) Now, is that less than they would have earned if I had bought some CDs? Lot's of artists might get some cents because of spotify which they wouldn't have earned elsewhere.